A Brief Summary of the French Revolution

By Brian Maregedze and Vincent Chenzi

The French Revolution took place in France between 1789 and 1799 and as largely characterised by political instability, violent demonstrations, social anarchy and widespread killings. It officially began on the 14th of July 1789 when the Bastille or symbol of the French ancient regime was ransacked by violent mobs. Throughout the French Revolution, the King, Louis XVI and the Queen, Marie-Antoinette and about 40,000 people were brutally murdered. However, there was also a positive side about the revolution. That is to say, the Declaration of the Rights of Man and Citizen was formally adopted in August 1789 and feudalism was abolished.

The French Revolution could largely be traced with a government financial crisis which quickly became a movement of reform and violent change throughout the country. In one of the early events, a crowd in Paris captured the Bastille, a royal fortress and hated symbol of oppression. A series of elected legislatures then took control of the government. King Louis XVI and his wife, Marie Antoinette, were executed. Thousands of others met the same fate in a period known as the Reign of Terror. The revolution ended when Napoleon Bonaparte, a French general, took over the government.

At the beginning of the revolution, unfolding events seemed minor and proceeded in a logical fashion. One of the reasons the revolution originated was the discontent of France’s lower and middle classes. By law, society was broadly divided into three groups called estates. The first estate was made of up the clergy, whilst the nobles comprised the second and the rest of the citizens consisted of the third estate. The third estate greatly resented certain advantages of the first two estates. That is to say, the clergy and nobles did not have to pay the bulk of the taxes. On the other hand, the third estate, especially the peasants, had to provide almost all the country’s tax revenue. Many members of the middle class were also worried by their social status.

They were among the most important people in the French society but were not recognized as such because they belonged to the third estate. Durant claimed that the, “Financial crisis developed because the nation had gone deeply into debt to finance the Seven Years War (1756-1763) and the Revolutionary War (1775-1783).” The Parliament of Paris insisted that the King Louis XVI could only borrow more money or raise more taxes only by calling a meeting of the estates-general. However, the estates-general meeting was made up of representatives of the three estates and had last met in 1614. Unwillingly, the king called the meeting. The estates-general opened on May 5 1789 at Versailles. The first two estates wanted each estate to take up matters and vote on them separately by estate. The third estate had has many representatives as the other two combined. It insisted that all the estates had to be merged into one national assembly and that each representative had one vote.

Furthermore, the third estate wanted the estates-General to draft a constitution. Unfortunately, the king and the first two estates refused the demands of the third estate. In June 1789, the representatives of the third estate declared themselves the National Assembly of France. Louis the XVI then allowed the three estates to join together as the National Assembly. Soon after, he began to gather troops around Paris to break up the Assembly. Meanwhile, the masses of France also took action. On the 14th of July 1789, a huge crowd of Parisians rushed to the Bastille. They believed they would find arms and ammunition there for use in defending themselves against the king’s army.

The people captured the Bastille and began to tear it down. At the same time, spontaneous peasant uprisings were also taking place throughout the countryside. The king’s removal led to a new stage in the revolution. The first stage had been a liberal middle-class reform movement based on a constitutional monarchy. The second stage was organized around principles of democracy. The National Convention opened on the 21st of September 1792, and it declared France a republic. Louis XVI was placed on trial for betraying the country. The National Convention found him guilty of treason and a slim majority voted for the death-penalty. The king was beheaded on the guillotine on the 21st of January 1793. Afterwards, the revolution gradually grew more radical-that is, more open to extreme and violent change. Radical leaders came into prominence. In the Convention, they were known as the mountain because they sat on the high benches at the rear of the hall during meetings. Leaders of the Mountain were Maximilien Robespierre, Georges Jacques Danton, and Jean Paul Marat. The Mountain dominated a powerful political club called the Jacobin Club. Woloch further stated that, “Growing disputes between the Mountain and the Gironde led to a struggle for power, and the Mountain won. In June of 1793, the Convention arrested the leading Girondists. In turn, the Girondists’ supporters rebelled against the Convention. One of these supporters assassinated Marat in July 1793.” 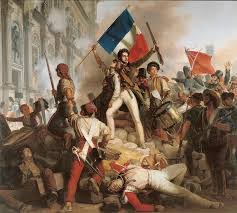 This was the most horrific period of the revolution. The Convention’s leaders included Robespierre, Lazare Carnot, and Bertrand Barere. The Convention declared a policy of terror against rebels, supporters of the king, and anyone else who vehemently disagreed with official policy. According to Woloch, “In time, hundreds of thousands of suspects filled the nation’s jails. Courts handed down about 18,000 death sentences in what was called the Reign of Terror. Paris became accustomed to the rattle of two-wheeled carts called tumbrels as they carried people to the guillotine.” In time, the radicals began to struggle for power among themselves. Robespierre succeeded in having Danton and other former leaders executed. Many people in France wanted to end the Reign of Terror, the Jacobin dictatorship, and the democratic revolution. Robespierre’s enemies in the Convention finally conspired against him for being a tyrant on 29th of July 1794. He was executed the following day. With Robespierre’s death, the Reign of Terror came to an end.

Afterwards, the Convention, which had adopted a democratic constitution in 1793, replaced that document with a new one in 1795. The government formed under this new constitution was called the Directory. France was still a republic, but once again only citizens who paid a certain amount of taxes could vote. The Directory began meeting in October 1795. In October 1799, a number of political leaders plotted to overthrow the Directory. They needed military support and turned to Napoleon Bonaparte, a French general who had become a hero during a military campaign in Italy in 1796 and 1797. Bonaparte seized control of the government on November 9, 1799, ending the revolution. Napoleon would restore order to the French people with such great achievements as his Code Napoleon.